Patent Applications in the African Continent having Origin in China

In recent years, the investment from Chinese companies has increased substantially. Chinese companies operating in Africa have contributed to the development of certain industries in different countries on African continent*. The fact that there is a growing investment by Chinese companies in African jurisdictions may result in a greater concern by these investors to protect their intellectual assets in Africa. In this sense, this article will seek to identify the profile of patent applications having origin in China and filed in African countries, in order to identify the main jurisdictions targeted by Chinese applicants and which are the technological fields of the respective patent applications.

Due to the scarcity of complete and updated databases in several African jurisdictions, we have tried to gather as much information as possible from several public patent database, per instance the database Espacenet of the European Patent Office (EPO) and the statistics database of the World Intellectual Property Organization (WIPO). As it will be discussed, the databases show convergent results for some jurisdictions with higher numbers of requests submitted. The WIPO database, despite not having as many results as the Espacenet database, ends up with information that can be filtered by more African countries than Espacenet. However, it will not be possible to obtain a full scanning of the complete scenario, but only a sample, that we believe to be representative of the purpose of this article, due to information gaps present in the two bases used for a very significant portion of African countries.

According to data from the Johns Hopkins University SAIS China-Africa Research Initiative, in the period between 2013 to 2018, Chinese investments were distributed, in approximate percentages, according to the following areas: construction (28%); mining (25%); manufacturing (13%); financial intermediation (13%); scientific research and technological service (5%); leasing and commercial service (6%) and others (10%).

We also refer that Chinese direct investment has supplanted US investment, with an increasing trend. This may imply, in the short range, an increase in patent applications filed in several African countries. The main countries where this Chinese investment has been applied are South Africa, the Democratic Republic of Congo, Mozambique, Zambia and Ethiopia. 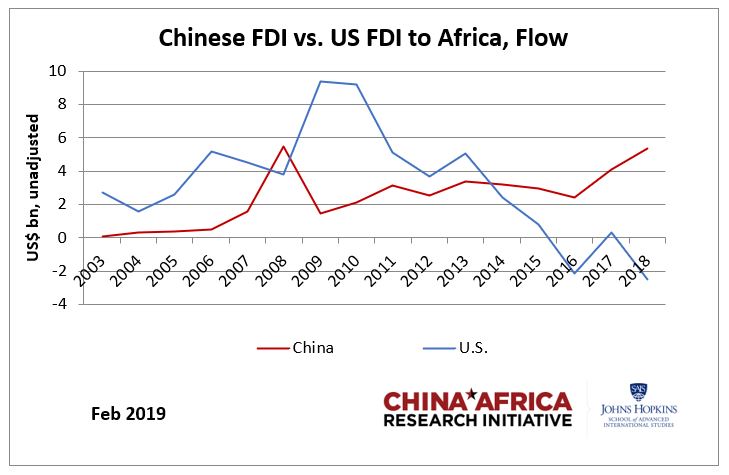 Total number of patent application having origin in China

The trend of filing of patent applications having origin in China Mainland before African countries and in the regional Patent Offices, African Intellectual Property Organization (ARIPO) and African Regional Intellectual Property Organization (OAPI) are shown in Figure 2. To identify these results, we used the WIPO statistics database. The results of Figure 2 were obtained through the indicator Total Patent Applications (direct and PCT national phase entries), in which the country of origin is China Mainland, and the filing Patent Offices correspond to the National Patent Offices of each one of the 54 current African countries and the two regional Patent Offices referred to from 2008 to 2018. The results show a massive predominance of patent applications in South Africa (sum of 2540 patent documents), followed by patent applications in Egypt (Sum of 278), ARIPO (Sum of 227), OAPI (Sum of 168), Morocco (Sum of 149), Algeria (Sum of 69) and Kenya  (Sum of 12). 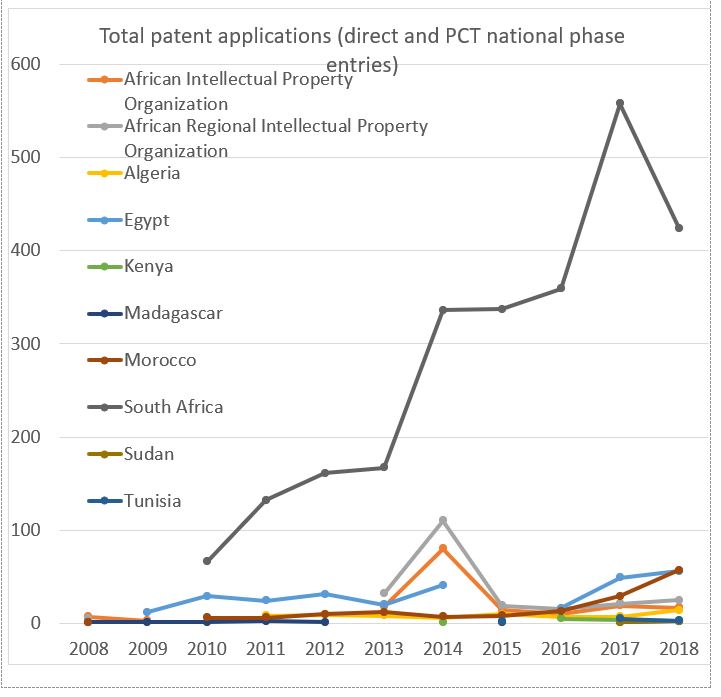 Based on the results of Figure 2, which shows the total number of patent applications originating in China filed in African jurisdictions from 2008 to 2018, it is possible to observe that most of the patent applications filed in the African continent were carried out in South Africa, with fractions significantly lower for Egypt, ARIPO, OAPI, Morocco, Algeria, Kenya, Madagascar, Tunisia and Sudan. However, it is worth mentioning that the WIPO database showed results for only 8 of the 54 African countries. Regarding said public databases used in this study, there is unfortunately a very significant information gap, as a considerable number of African Patent Offices do not publish information on filed patent applications, resulting in gaps in the records of the public databases.

Regarding the main technological fields of applications filed by Chinese applicants in Africa, emphasis on patent applications related to the areas of telecommunications, pharmaceuticals, chemicals, and industrial equipment is observed in the set of results.   Unfortunately, there is a massive number of publications of patent applications without information about the respective technological fields, wherein 514 of the 521 results without information refer to filings in South Africa Patent Office. To reach these results, the same query criteria used to obtain the results in Figure 2 were used, and the indicator “Patent Publications by Technology (county by filing office and applicant's origin from 2008 to 2008)” was used.

In order to corroborate and supplement the results obtained in the WIPO statistics database, a supplementary search was conducted in the Espacenet database, in which the search parameters consisted of: Chinese priority document, year of publication of the patent application from 2008 on and patent application published by any African Patent Office. 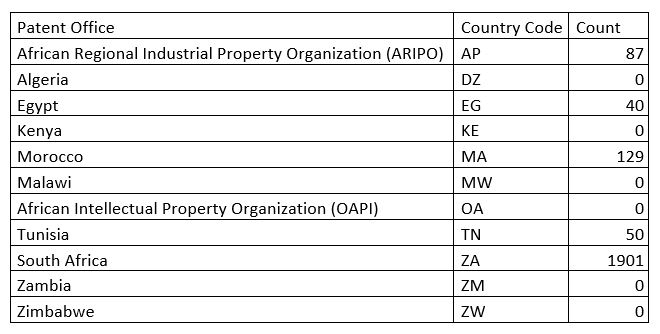 The next step in this study involved identifying the profile of patent applications filed at each one of the five Patent Offices mentioned in Table 1. We employed the Patent Inspiration analysis tool to identify the evolution in the number of patent applications filed over time, the main technological fields and the main applicants.  For each one of the jurisdictions mentioned below, a query was performed on the said analysis tool using the patent application numbers filed in each jurisdiction (this information was obtained through the Espacenet database).

Regarding South Africa numbers, Figure 3 shows the growing trending of patent applications having at least one Chinese priority document filed before the South African Patent Office, published between 2008 to 2019. The main technological fields of applications filed in South Africa, represented by symbols of the Cooperative Patent Classification (CPC), are based on technologies in the pharmaceutical and telecommunications areas. The main applicants include some prominent Chinese corporations in the telecommunications and mining sectors, the latter being a very relevant activity in the South African economy. The top 3 ranking of applicants consists of Huawei Tech. Co. Ltd, GRG Banking Equipment Co. Ltd and Univ. China Mining. The results also show that several multinationals with origins in several other countries are co-applicants in some patent application, for example, Unilever NV and Sony Corp. The countries of origin of the applicants have a clear predominance of Chinese applicants, but also comprises some minor fractions of applications including applicants from other countries, namely the USA and some European countries. 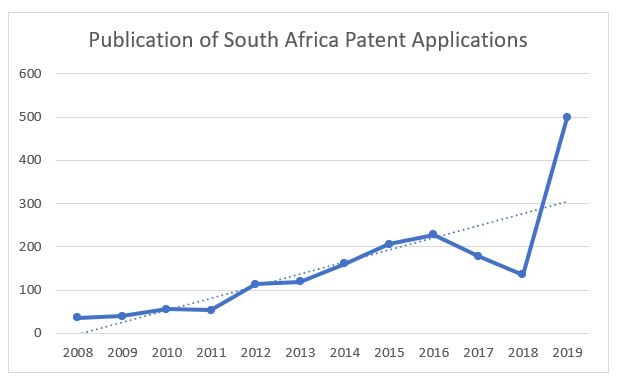 Regarding ARIPO fillings, Figure 4 shows the evolution of patent applications having at least one Chinese priority document filed before the African Regional Intellectual Property Organization and published between 2008 to 2019.  These numbers show a slightly increasing trend in applications filed, but with very low absolute values. This is an unexpected result since ARIPO is a relevant regional Patent Office comprising 18 Member States. In its turn, pharmaceutical products and agrochemicals have a prominent position regarding the main technological fields of applications filed before ARIPO, according to the symbols of the International Patent Classification (IPC).  As an expected result, China is the main origin of the applicants that file patent applications before ARIPO. Moreover, a significant mention to other countries suggests a joint participation of Chinese applicants with organizations from other countries, for example, France, Switzerland, Japan and United Kingdom. 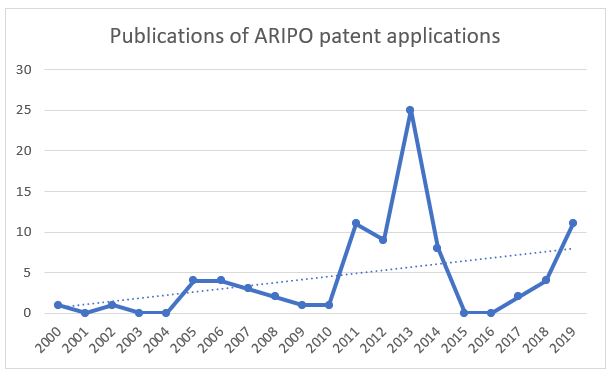 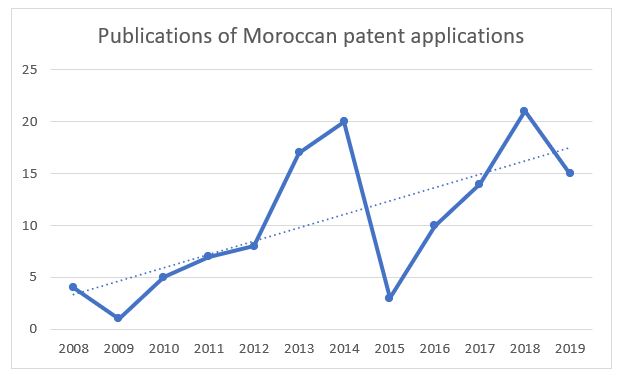 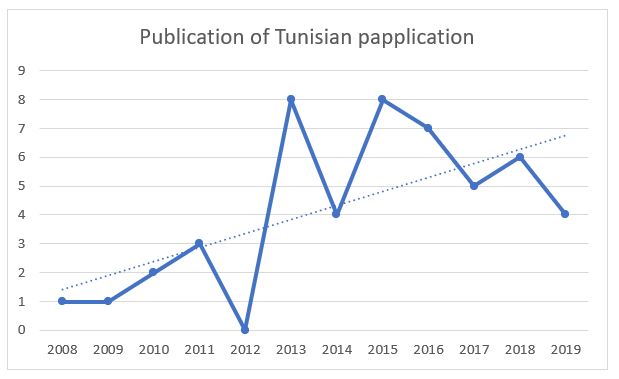 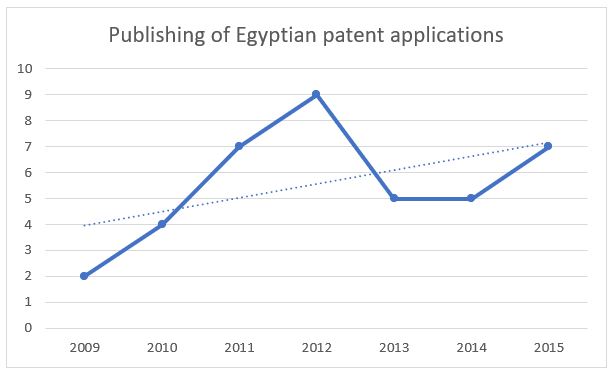 From this study, it is possible to remark some useful conclusions that indicate the current scenario of the protection of intellectual assets of Chinese organizations in African jurisdictions.

As a disclaim, we must emphasize, once again, that the impossibility of obtaining a representative sample of the data corresponding to filings of patent applications in African countries makes impossible the task of properly analyzing trends in the protection of inventions with greater certainty. As a first remarkable result, the WIPO statistics database shows a significant and growing volume of applications submitted in South Africa, which is corroborated by results retrieved from the Espacenet database. Moreover, the results also converge in the sense that patent applications filed at the two African regional Patent Offices suggest an underutilization of this protection route in the African continent, when considering the high number of countries covered by ARIPO (19 Member States) and OAPI (17 Member States). On the other hand, the results retrieved by means of the Espacenet database show that there was a decrease in filings of patent applications in the years after the 2008 financial crisis that hit most countries in the world. Slowly, there was a stabilization and we have noticed a growing trend of filings of patent applications in countries like Egypt, Tunisia, Morocco, and South Africa. At ARIPO, we can also observe that the trend is following a similar trend.

However, we cannot declare that the growing investment of Chinese companies in Africa has a significant positive correlation with the filing of patent applications in Africa. Therefore, the meaning in protecting inventions in these jurisdictions cannot be properly evaluated, since we are unable to correlate the results obtained with this Chinese investment growth, due to insufficient data related to patent applications in most of African countries.

In this sense, we can only call attention to Chinese applicants, who are investing in African jurisdictions, to protect their Intellectual Property assets by safeguarding them from any obstacles they may encounter.