The pandemic caused by COVID-19 (SARS-COV-2) is completing a year since the most comprehensive health measures to combat the virus began. Intensive efforts to develop new active ingredients, treatment methods and vaccines have been carried out by the scientific community and pharmaceutical companies.

The results and the launch of new vaccines are observed with great interest by the general public. This study presents the current phase of published patent applications for active ingredients, drugs and vaccines to combat SARS-COV-2, in addition to the main applicants involved.

In order to identify patent applications published from 2020 onwards, we use the Espacenet database with keyword search related to SARS-COV-2 and through patent classifications referring to the technological fields of the types of medicines. Patent classifications consist of indexing codes assigned by the Patent Offices and specific by technology, which can be used as search filters in the database. In this study, we applied the patent classifications shown in table 1.

After searching for the IPC classification symbols and the keywords in the Espacenet database, we obtain the results listed in Figure 1. A preponderance of medicinal preparations related to organic chemical active ingredients or to medicinal preparations including antigens and antibodies is visible. Despite the research fronts with organic chemical compounds appear to have been explored, these technologies have not yet materialized into a medicine effectively approved by public health regulatory agencies. In fact, the main technologies previously mentioned and related to the preparation of vaccines against SARS-COV-2 fall under the symbol of IPC A61K39. 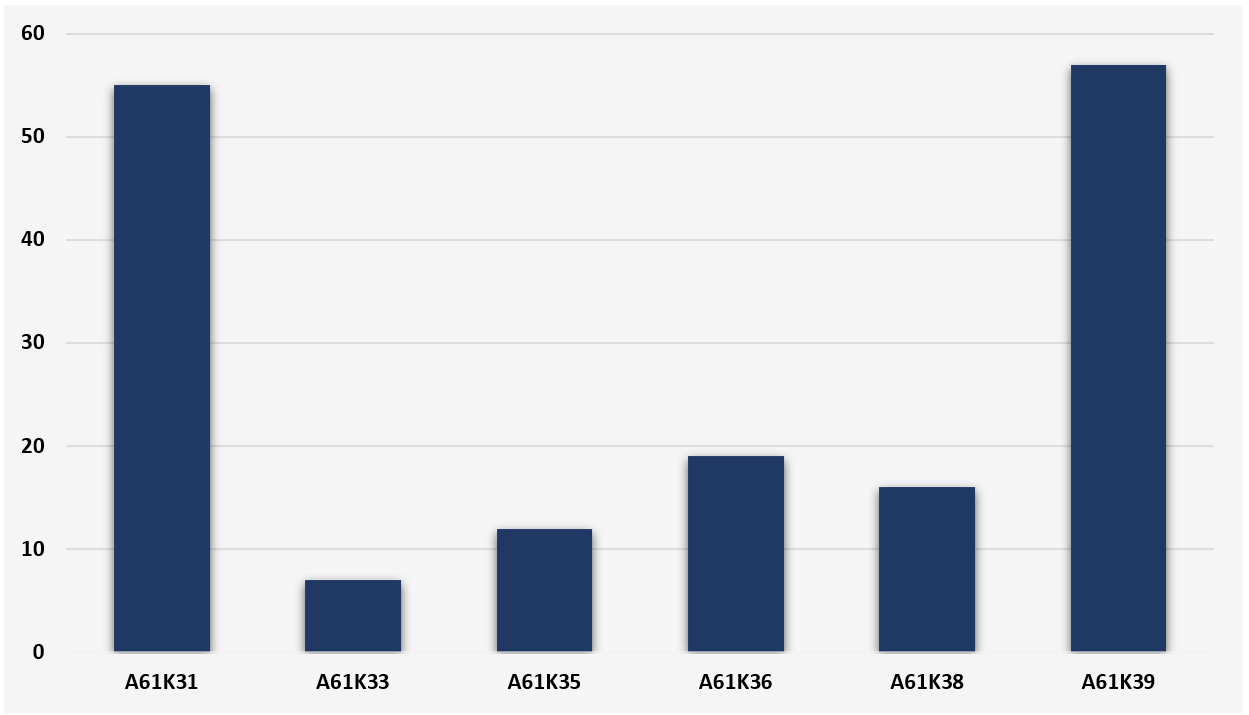 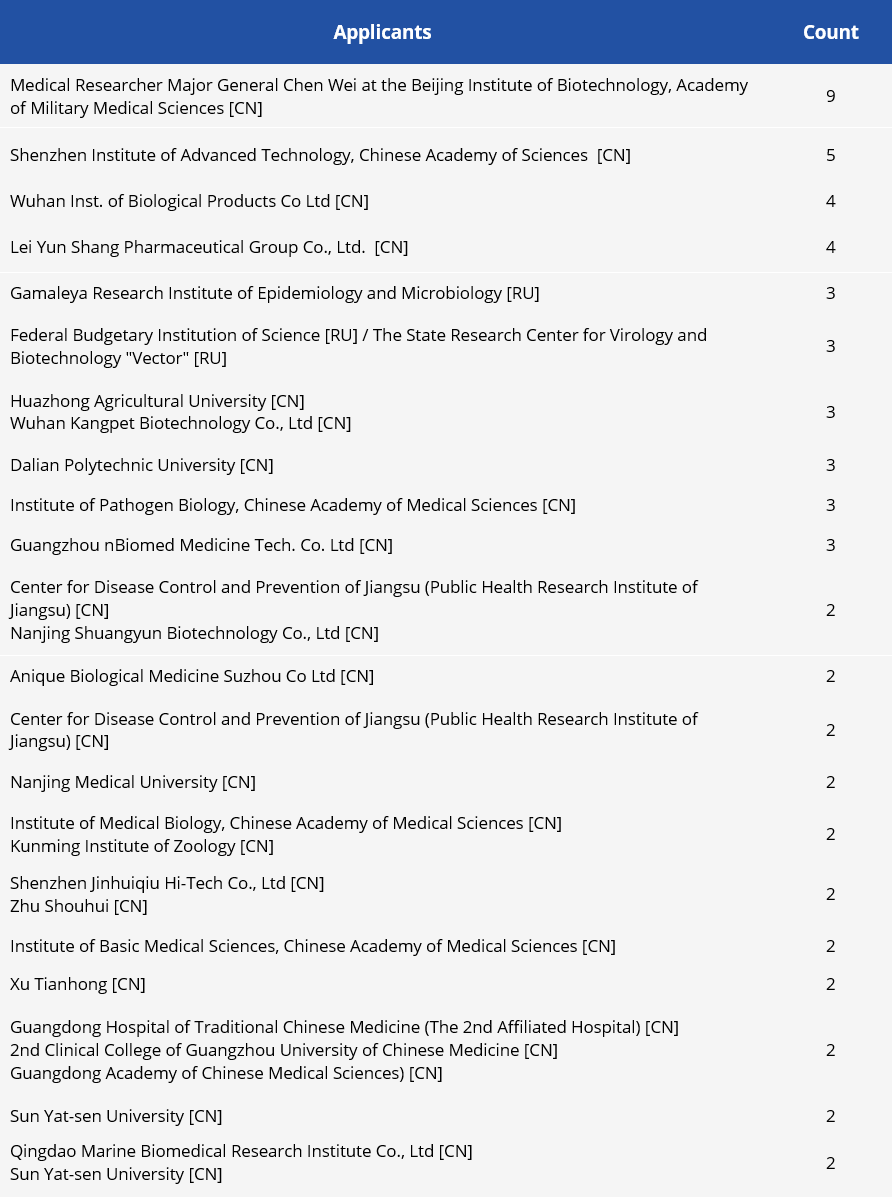 Following the identified applicants, we were able to separate the countries of origin of the applicants in this set and see a wide predominance of Chinese applicants. 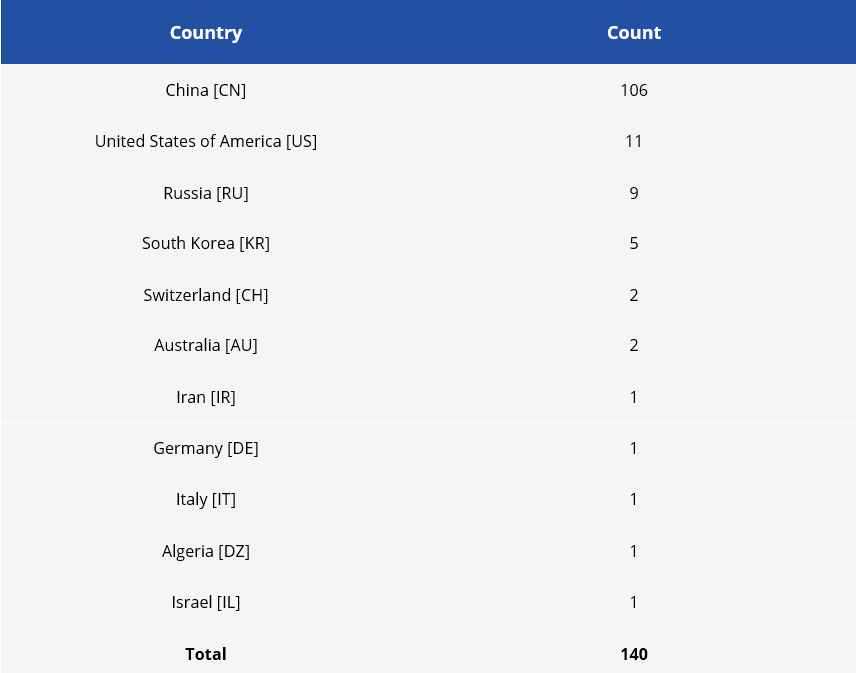 As noted in Figure 2, applicants for patent applications published to date are predominantly Research Institutes or Universities. 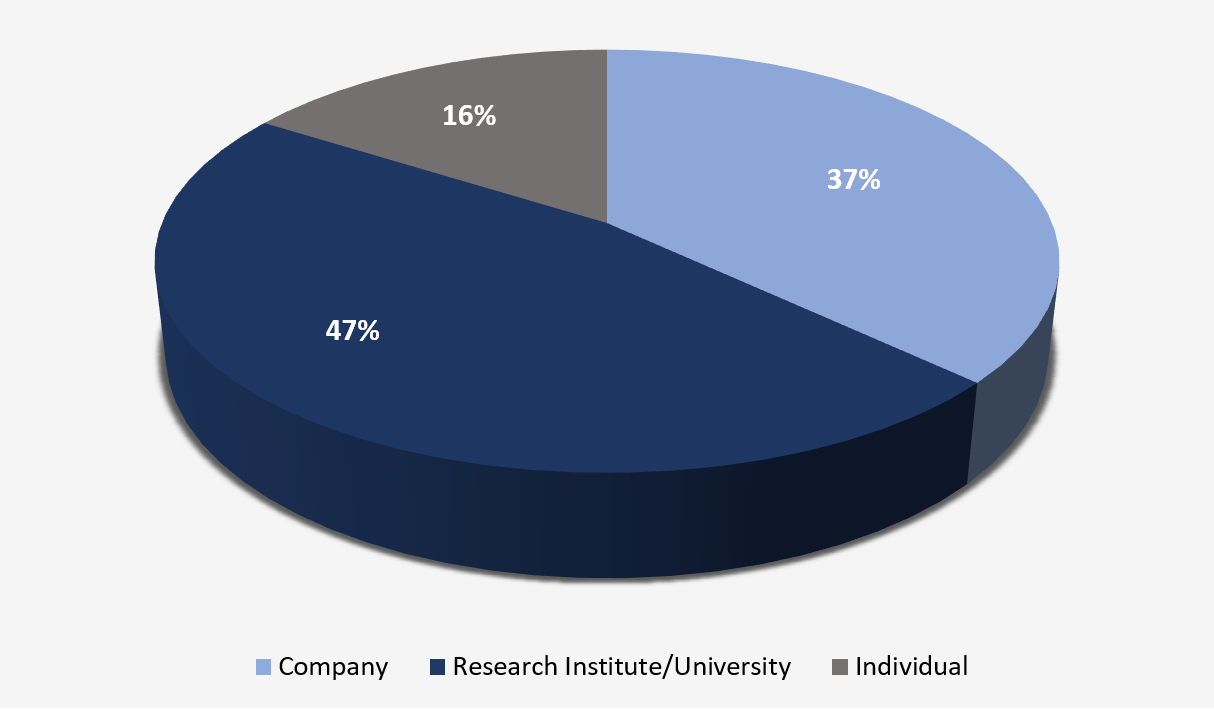 When looking for patent applications published so far, it is evident that the major pharmaceutical companies and most of the organizations that have already seen their vaccines approved by Organs regulatory bodies are not present in the list.

Although it may seem strange at the outset, this means that, to date, these organizations have not yet had their patent applications published. One of the most likely hypotheses is that these organizations want to exploit to the maximum the competitive advantage of the secrecy of their technologies, given that the patent system guarantees confidentiality of up to 18 months, if it is of interest to the applicant. Thus, the actual number of patent applications submitted will be significantly higher than that identified in this study.

On the other hand, Applicants of patent applications published so far (and present in this study) may have adopted other strategies: by requesting the Patent Offices to publish their patent applications in advance, they aim, for example, the most comprehensive disclosure of their technologies in critical pandemic control periods, in addition to achieving greater visibility to raise investments or establish technical partnerships.

In the set of patent documents published to date, attention is drawn to the patents granted in which the applicant is the Gamaleya Research Institute of Epidemiology and Microbiology, the institute responsible for the development of the Sputnik V vaccine, and which has received a certificate of registration of the Russian Ministry of Health. This vaccine is based on the adenovirus vectors rAd26 and rAd5, which promote the delivery of antigens to the human body, to promote the immune response. To date, there are three Russian patents related to the Sputnik V vaccine (RU2720614C1, RU2731342C1 and RU2731356C1). The Russian patent RU2720614C1 has already been internationalized through application WO2021002776A1 and in the future patent protection in other countries should be requested. The Russian patent applications identified in this study were granted quickly, based on an examination acceleration program instituted by the Russian Patent Office (Rospatent) for inventions related to combating the pandemic. According to data from Rospatent, the average time for deciding whether to grant a patent application under this program is approximately 22 days. This time required for the decision is very short, considering that under normal conditions, when there are no mechanisms for accelerating the examination, a patent application can take between 2 to 4 years to be decided.

Based on this research, some questions arise:

Of this set of applications, how many patents will be granted? This question is based on the rules of the patent system, in which a patent is only granted when the invention meets the requirements for patentability, namely industrial application, novelty and inventive step.

And how many drugs approved by Organs health agencies will reach the market? At this point, it stands out that the patent system is disconnected from the health surveillance system and the granting of a patent does not necessarily indicate that the product will be approved as a medicine.

How can patent protection of a drug influence access to it? Although the protection of a technology by a patent gives its owner the right to prevent third parties from exploiting it, in a pandemic context, the public interest becomes more important than the exclusivity of exploitation.

Therefore, in the absence of an agreement between the government of a country and the aforementioned patent owner, the Patent Laws of several countries make it possible to apply for a mandatory patent license, which results the obligation of the patent holder to grant the license to exploit the invention for reasons of public interest.

Patenting Activity before the European Patent Office by Chinese Organizations