By the end of 2019, humanity was confronted by a new infectious disease caused by a new coronavirus, the covid-19 that led, on March 11th, 2020 the Word Health Organization (WHO) to declare the state of a global pandemic.

The fight against this new virus has demanded several technical innovations and, apart from the vaccine, many have been the inventions that required the protection by patent: retroviral medicines, diagnostic tests or medical devices, such as ventilators are some of these examples. Nevertheless, the most visible face of this combat has been the vaccine, which put the pharmaceutical companies in a race for its development.

At the time of writing, the vaccines of Pfizer-BioNTech, Moderna, AstraZeneca, Janssen, Sinovac (CoronaVac) and Sputnik are being administered worldwide and most of the developed countries in Europe and then the United States of America, Russia and China expect to obtain group immunity by the end of the year of 2021.

This is a situation only possible due to the economic power that the countries have, either to develop the vaccines or to buy the same. Unfortunately, none of these possibilities are viable when we speak about underdeveloped countries, which is a situation that is currently taking place across Africa. Indeed, countries in Africa are being devastated by the pandemic of covid-19, however, the combat to the same is not as fair as the combat that is taking place in developed countries.

The access to the vaccines by these countries is a problem that found a solution in the Covax incentive, an international mechanism co-led by Gavi (The Vaccine Alliance), the Coalition for Epidemic Preparedness Innovations (CEPI) and the World Health Organization with the aim of accelerate the development and manufacture of covid-19 vaccines, and to guarantee fair and equitable access for every country in the world. The international mechanism is planned to distribute two billion doses of vaccines until the end of the year to underdeveloped countries, and it has agreements with AstraZeneca, Pfizer-BioNTech and Moderna.

Ghana was the first African country to receive vaccines under the international mechanism of Covax in February: 600,000 doses of the vaccine developed by AstraZeneca. Since then, Algeria, Malawi and Uganda have also received doses of the vaccine from the same laboratory. In early March, Rwanda was included in the batch of vaccines from Pfizer-BioNTech under Covax. However, this situation is far from ideal, as the percentage of the population that currently has access to the vaccine in Africa is extremely reduced. 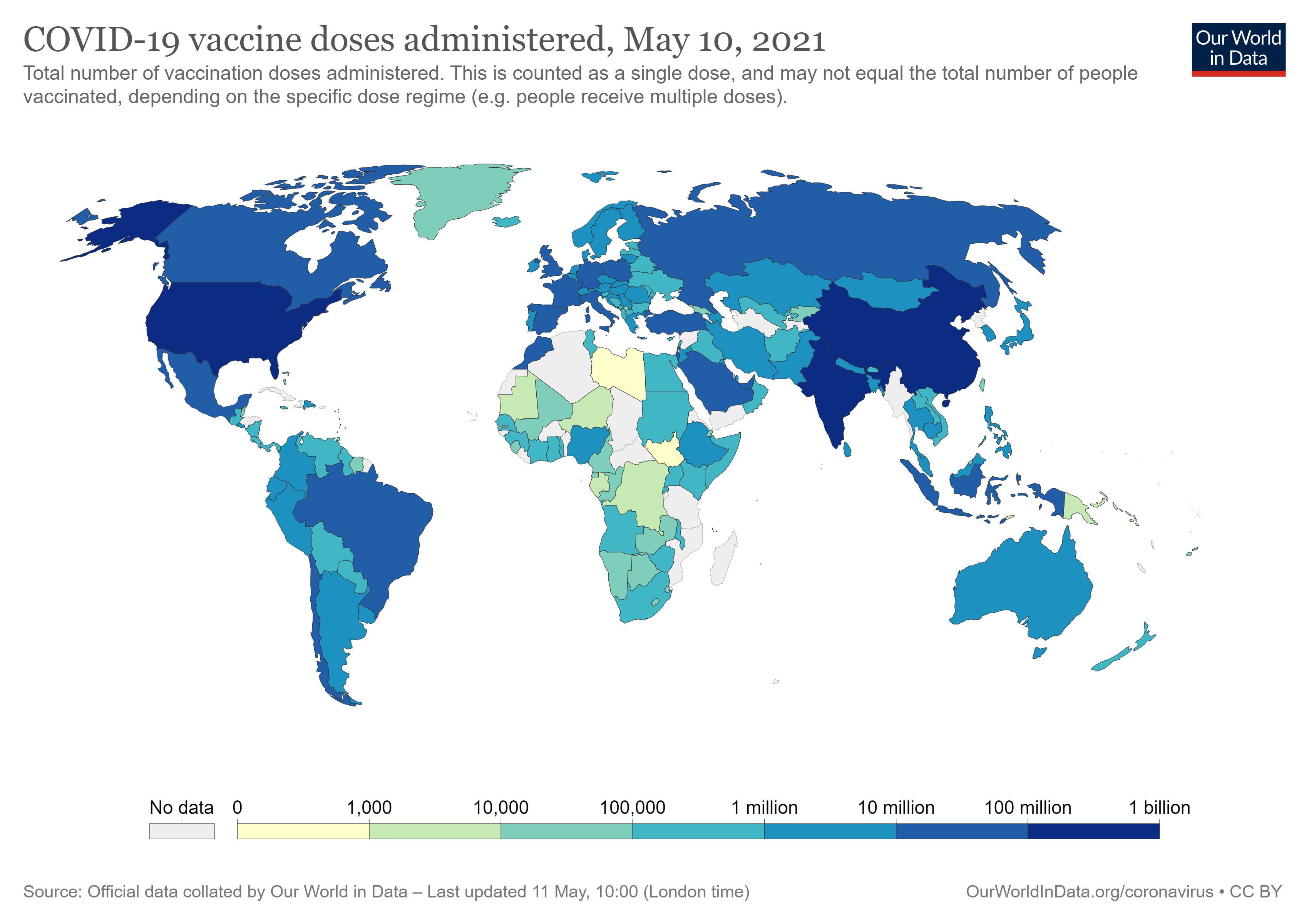 Many have been the public declarations by António Guterres, the current secretary-general of the United Nations, where he has criticized the “wildly uneven and unfair” distribution of the vaccines and has been appealing for the solidarity of the countries to adhere to this international mechanism. Accordingly, only a strategic global vaccination plan would avoid future mutations of the virus in the countries where the vaccination does not have advanced and would allow to fight the virus efficiently. It is important to note that two mutations of the virus took place in Brazil and South Africa and it is certain that if the pandemic is fought on a global level, it would be possible to avoid future mutations that would only delay the economic recovery of the countries and the regain of some normality.

Patent system and collision with the right to health

The access to pharmaceutical products, particularly the access to the vaccines for covid-19 may also find a solution through the application of the rules of intellectual property.

The vaccines that are currently being administered are protected by patent. A patent is a right granted by the government, in which the inventor has the exclusive right to explore the invention during the period of 20 years. To be granted, the patent is required to meet certain requirements, particularly, novelty, inventive step, and industrial applicability. Pharmaceutical products that are protected by patent are sold with a higher cost in relation to the production cost, to compensate the investment in I&D. The grant of a patent intends to promote technological and scientific progress by way of offering to the inventor exclusivity in the market.

Nevertheless, the patent system as it is designed collides with a commensurable ethical aspect: the right to health.

For this reason, the patent system is not strict and determines mechanisms that allow access to pharmaceutical products, particularly, vaccines protected by patents. The most relevant limitations and exceptions to the patent system may be summoned as follows:

Compulsory licensing as a mechanism to access pharmaceutical products (vaccines)

As stated above, the compulsory license is when a government allows someone else to produce a patented product or the patented process without the consent of the patent owner.

The license may be granted when (i) there is lack or insufficiency of the exploration of the invention; (ii) there is patent dependency; or (iii) when there are public interest reasons, in which public health is, of course, included.

The grant of compulsory licenses is dependent on a proportionality judgment between the right to the patent and the public health, however, it has been indicated as the main instrument to access to patent medicines and vaccines.

Article 31 of TRIPS Agreement authorizes countries to make provisions for grant of compulsory license to third parties without authorization from the patent holder and lays down certain conditions which shall be considered while granting compulsory license.

"Despite this legal mechanism that allows underdeveloped countries to access the vaccines or other patented medicines, there is no record of African countries making use of the same during the pandemic of covid-19 until today."

Until 2001, when the Doha Declaration was signed at a Ministerial Conference from WTO, compulsory licensing was not admissible for exportation. This amendment allowed underdeveloped countries to import pharmaceutical products protected by patent under the issuance of a compulsory license. This was an extremely important amendment since underdeveloped countries would have the faculty of issuing compulsory licenses, however, would not have the capacity to produce pharmaceutical products. Under this amendment, these countries can import the products from countries that have the capacity to produce the same. The Doha Declaration expressly mentions the importance of the amendment, by recognizing “the gravity of the public health problems afflicting many developing and least-development countries, especially those resulting from HIV/AIDS, tuberculosis, malaria and other epidemics” and that the “TRIPS Agreement does not and should not prevent Members from taking measures to protect public health”.

Despite this legal mechanism that allows underdeveloped countries to access the vaccines or other patented medicines, there is no record of African countries making use of the same during the pandemic of covid-19 until today. Indeed, only Israel has issued a compulsory license for the importation of a retroviral medicine (Kaletra), due to the incapacity of the patent owner to produce the same.

Considering that the pandemic is still far from being controlled, depending on the efficacy of the Covax initiative or any other mechanism that may be used (uplifting of the rules of TRIPS Agreement has it has been defended by some), it is possible that we see some countries in Africa issuing compulsory licenses to access to covid-19 vaccines.

Use of compulsory licenses by African countries

One of the examples was Mozambique, which in 2004 issued a compulsory license for importation of three retroviral medicines, the lamivudine, the stavudine and the nevirapine, to control the epidemic of HIV/AIDS, considering the mortality and transmission rates at that time, that made Mozambique one of the top 10 countries most affected by the disease. In the same year, other compulsory licenses were issued by the Government of Zambia and Swaziland for the same effect.

In 2005, in Cameroon, Ghana, Guinee and Eritrea, the Governments issued compulsory licenses for the importation of retroviral products to fight the pandemic of HIV/AIDS.